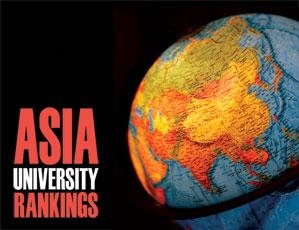 And in the QS University Rankings: Asia 2015, China has consolidated its lead position. One in four of Asia’s top 100 universities are Chinese institutions, and of these 25 leading universities, 16 have improved their positions this year.

Phil Baty, editor of Times Higher Education Rankings, said: “The world expects that Asia will be the next global higher education superpower, after Europe and North America. The new data from Times Higher Education demonstrate that many of the continent’s leading universities are already competing on equal terms with the best in the West.”

Top institutions in THE rankings

According to THE, although Japan still boasts the region’s top institution, the University of Tokyo, it has seen the number of universities in the top 100 fall to 19, down from 20 last year and 22 in 2013.

By contrast, mainland China has three new top 100 entrants, taking its total above Japan’s for the first time: with 21 representatives in all, up from 18 last year and 15 in 2013.

Macau entered the THE list for the first time, with the University of Macau placed joint 40th.

Taiwan has 11 universities in the list, down from 13 last year and 17 in 2013. National Taiwan University, its best performer, slipped from 14th to 17th.

India’s strength has also deteriorated slightly this year with nine representatives, down one on 2014. However, the Asian giant has a new number one – the Indian Institute of Science enters the THE’s table in 37th, one place ahead of last year’s leader, Panjab University.

Five Indian institutes of technology led by IIT Roorkee (joint 55th) take the main share of the country’s representation, although they are joined in the top 100 by Aligarh Muslim University (90th) and Jawaharlal Nehru University (96th).

Singapore has only two top 100 players, but both are in the top 10. The National University of Singapore held second place, while Nanyang Technological University moves into the top 10 for the first time at tenth.

Phil Baty said Chinese universities are “reaping the rewards of serious, sustained investment and internationalisation – a model for other Asian nations to follow”.

In the QS University Rankings: Asia 2015, the National University of Singapore retains the overall top spot and Singapore’s Nanyang Techological University climbed from seventh to fourth.

The next best performer in the top 10 was South Korea with KAIST (third), Seoul National University (eighth) and Postech (tenth).

China’s highest-ranked institution, Peking University, climbed one place this year to seventh place. It is closely followed by Tsinghua University, which moved up three places to eleventh.

According to Ben Sowter, QS’s head of research, China’s gains in the QS Asia ranking have largely been driven by a surge in citations.

“The majority of the ranked Chinese institutions are increasing their research output, spurred by the impressive and sustained level of public and private investment, second only to the United States,” he said.

“However, the country’s leading universities are still lagging behind in terms of research citation numbers, which reveal the impact of the research they produce.”

By contrast, only nine Indian institutions feature among the top 100, with the Indian Institute of Science (34th), emerging as the country’s leading representative.

Japan remains the second most represented country in the rankings with 68 institutions, behind China which now boasts 74. Yet 14 of the 19 Japanese universities featured among the top 100, lost ground compared to 2014.

The THE and QS Asia rankings are not directly comparable, because they use different methodology and the THE Asia ranking includes Middle East universities, whereas QS has released a separate full Arab Region 2015 ranking.

The THE rankings compare universities against all of their core missions – teaching, research, knowledge transfer and international outlook – using 13 performance indicators.

QS used a methodology based on nine performance indicators, and compares leading institutions on factors including global reputation, research production and impact, and internationalisation.

In the THE Asia rankings, the Middle East is well represented.

Turkey has six universities, up from five last year, and all make the top 50. Middle East Technical University rises 17 places to 12th.

According to THE, this “stunning progress” is “largely attributable to its outstanding research impact”. Bogazici University has taken 14th position, up from joint 19th, and new entrant Sabanci University almost made the top 20.

Four Israeli universities make the top 100, up from three in 2014. Tel Aviv University came 22nd, despite falling three places: it displaces the Hebrew University of Jerusalem, which dropped from 18th to 25th. Meanwhile, Bar-Ilan University re-entered the table at joint 75th, having missed out last year.

Saudi Arabia has two representatives, with King Fahd University of Petroleum and Minerals in 71st position and King Saud University one step behind. Both institutions have made gains on 2014.

Lebanon’s sole representative in the list is the American University of Beirut, which falls two places to joint 88th.

QS did not include Middle East universities in its Asia rankings, instead releasing a separate QS University Rankings: Arab Region 2015, which it describes as its “first full university ranking for the Arab world”.

It features 100 universities from 15 of the 21 countries – all members of the Arab League – that are eligible for inclusion. Almost 260 institutions were evaluated during the exercise and 194 had enough data to be ranked, as well as being sufficiently broad-based to be included.

No data could be collected on universities in Syria, and the universities of Mosul and Tikrit, in Iraq, were reported to be closed at the time that the ranking was compiled.

King Fahd University of Petroleum and Minerals in Dhahran, Saudi Arabia, emerges as the region’s top institution, finishing in the top 20 on six of the nine indicators.

According to QS, the ranking reflects the diversity among universities in the Arab region. Nine of the top 20 are classified as ‘extremely large’, some with as many as 200,000 students. Most are fully comprehensive, public institutions, and relatively few have a strong research focus.

Brazil and Chile continue to dominate in this ranking with Mexico, Argentina and Colombia struggling to keep up. Argentina boasts three universities among the top 20 but nearly half of its ranked institutions lost ground this year.

Mexico’s UNAM regained its leading position nationally followed by Tecnológico de Monterrey, both among the top 10.

“Universities from Mexico, Argentina and Colombia excel in specific areas, but they still lack the all-round consistency of the top institutions from Brazil and Chile,” Ben Sowter said. “High student-to-faculty ratios are an issue at several major public research institutions throughout the region.”