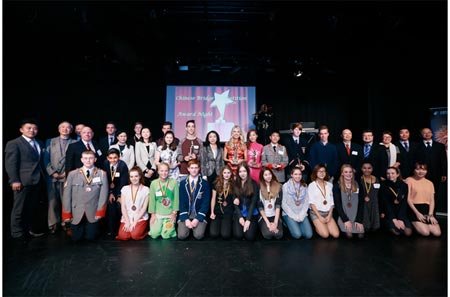 A group photo of the participants at the competition. (Photo/Chinese Bridge 2015)

The 14th edition of the Chinese proficiency competition for foreign college students, Chinese Bridge 2015, was held in Strasbourg on Saturday and set a high-water mark for Chinese language education in France.

At the end of the preliminary round for students across France and its territories, four students were selected to travel to China and three will compete in the Chinese Bridge final this summer.

Inspector general of Chinese for the French National Ministry of Education and president of the jury for the competition, Joel Bellassen, took the occasion to remark on the notable achievements of Chinese language education in France.

"There are one hundred thousand students of Chinese in France, including primary and secondary education, as well as in associations," he told Xinhua at the event. "Half of that one hundred thousand is within the primary and secondary divisions of the regular education system - that's an enormous proportion which is unheard of in the Western world."

In just a few years, Chinese moved from the ninth to the fifth places among languages taught in France in secondary education, after English, Spanish, German and Italian.

"Sadly, not all of our teachers are tenured. Many are contractual who don't have the same training, and who haven't passed a qualifying exam. It's necessary for that to evolve, but that takes time. We have been surprised by the evolution of enrollment. That's the ransom of success," acknowledged the inspector general.

Bellassen was the first inspector general of Chinese for France, ever since he was nominated for the post in 2006 in some urgency, when the French government realized the pressing need as demand for Mandarin language classes grew throughout the country.

Indeed, council minister of Education for the Chinese Embassy in France, Ma Yansheng, recalled that the first Chinese Bridge competition in France received only 16 competitors, while this year's enrollment surpassed 100 — each pre-selected after a regional competition.

As part of the growing importance of Chinese education, inspector general Bellassen launched the European Association for Chinese Language Teaching in 2014, whose seat is in Paris. "There are currently 15 countries participating, but we had a meeting in Hungary just two weeks ago and we will soon launch in 15 different countries in Eastern Europe," Bellassen announced.

"The objective is to publish a white paper by 2016 for Chinese language teaching in Europe, a program that even China has not succeeded in doing," he added.

Strasbourg, home of several European institutions such as the European Parliament and the Council of Europe, appeared to the inspector general as a significant location for the Chinese Bridge 2015 competition in France.

Council minister Ma Yansheng was optimistic about continued development for Chinese language education in France. Citing the anniversary in 2014 after fifty years of diplomatic relations between France and the People's Republic of China, the council minister told competitors, "this year's competition opens into the future."

Consul general He Yanjun saw the benefits of the competition for Franco-Chinese relations, joking: "If a French Bridge competition had existed in my time, my level in French would be much better than it is today!" before congratulating the competitors for their "extraordinary mastery of the language."

During this phase of the competition, each student took a written exam on Sunday, before being given six minutes on Monday to make a speech and an artistic performance before a jury of five judges. The speeches shared the students' experiences learning Mandarin, and evoked their wishes for the future under this year's theme: "My Chinese Dream." The artistic performances were related to Chinese culture, and the French competitors used dance, musical performance, painting, poetry recitals and other talents to show their love for Chinese culture.

Out of the 27 competitors, 11 were recognized, with five prizes awarded for categories such as interpretation and elocution, and six overall prizes. The top three winners will compete in the Chinese Bridge 2015 final in China, and one runner-up will go with the group to accompany them.

Mathilde De Bortoli took runner-up with her speech "My Chinese Dream." Mickael Decrock was classed third, with his speech "The Cultural Differences between France and China." Sandra Lamarre placed second for her speech "Chinese Harp and Song." First place was won by Jourdain Thibault for his speech "I Want to Become Rich. "

According to Michel Cheray, president of the Confucius Institute of Alsace, nearly 6,000 French students travel to China every year to study in Chinese universities.