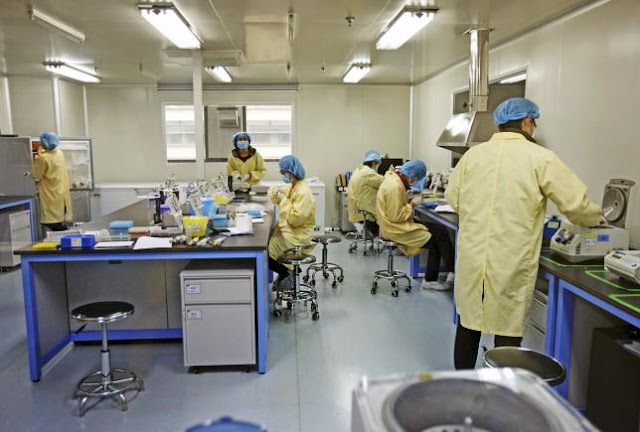 Researchers work at a laboratory at a genomics organization in Tianjin, China, April 2, 2014.
REUTERS/STRINGER

Years of pouring money into its laboratories, wooing scientists home from overseas and urging researchers to publish and patent is starting to give China a competitive edge in biotechnology, a strategic field it sees as ripe for "indigenous innovation."


The vast resources China can throw at research and development - overall funding more than quadrupled to $191 billion in 2005-13 and the Thousand Talents Program has repatriated scientists - allow China to jump quickly on promising new technologies, often first developed elsewhere.

These efforts were illustrated vividly in April - not without controversy - when scientists at Sun Yat-sen University in Guangzhou published results of a ground-breaking experiment to alter the DNA of human embryos using new CRISPR-Cas9 gene editing technology.

CRISPR, which allows scientists to edit virtually any gene they target, is akin to a biological word-processing program that finds and replaces genetic defects.

The Guangzhou team is not alone. Data compiled by Thomson Innovation, a Thomson Reuters unit, shows China is a growing force in gene editing, with a burgeoning patent portfolio.

More than 50 Chinese institutions are patenting in the field, led by the Chinese Academy of Sciences, universities, the Anhui Academy of Agricultural Sciences and Beijing Jifulin Biotech. Nearly a fifth of the 518 families of gene editing patents analyzed since 2004 were associated with Chinese entities.

For top-tier institutions, "the level of available resources is incredible in terms of the freedom, the flexibility that gives key leading Chinese scientists to move very, very fast on a given research track if a new opportunity arises," said James Wilsdon, professor of science and democracy at the University of Sussex.

Shenzhen-based BGI, formerly the Beijing Genomics Institute, for example, claims to be the world's largest genomics organization, though the original gene sequencing technology was developed in the United States and Britain.

China was also first to approve a gene therapy to treat head and neck cancer in 2003, though it remains controversial abroad, and Chinese scientists have pushed the boundaries in animal research.

"The Chinese could, over time, play a very significant role in this game as they have a very entrepreneurial attitude - much more so than in parts of Europe," said Rodger Novak, CEO of CRISPR Therapeutics, a private Swiss-American biotech business.

One of the attractions of CRISPR, which has the potential to eliminate certain diseases but also create designer babies, is its ease of use.

"CRISPR technology is very simple. That's the beauty of it. It has taken off rapidly in the academic environment because it works, it's reliable, it's cheap and you don't need a lot of knowledge to make use of it," said Novak.

The technique has taken biology by storm, igniting a fierce patent battle. Some in the field believe CRISPR could prove as revolutionary, and as profitable, as recombinant DNA technology, which was developed in the 1970s and 80s, and launched the biotechnology industry.

But CRISPR has also been controversial.

The paper by the Chinese team, led by Huang Junjiu, provoked an outcry from some U.S. and European scientists because it was the first to use human embryos.

Professor Wilsdon said there is "a tendency to consider China at times like a Wild East frontier" where ethical concerns are given less weight, but he noted "there are intense debates within the Chinese system about bioethics."

Robin Lovell-Badge, Head of Developmental Genetics at Britain's National Institute for Medical Research, does not believe the Chinese have a permanent edge in gene editing.

"It's been so obvious that these techniques will be used in human embryos at some point. I don't think there's any intellectual advantage. They've just done it first, and not very well," he said.

Guoji Guo, a beneficiary of the returnee scheme and a professor at Zhejiang University using CRISPR on stem cells, said Huang's work was significant, but still relied on a tool developed in the United States.

"We want findings that can change the world," Guo said. (Source - reuters.com)