More than 100 Belgian Students to Visit China in Mid July 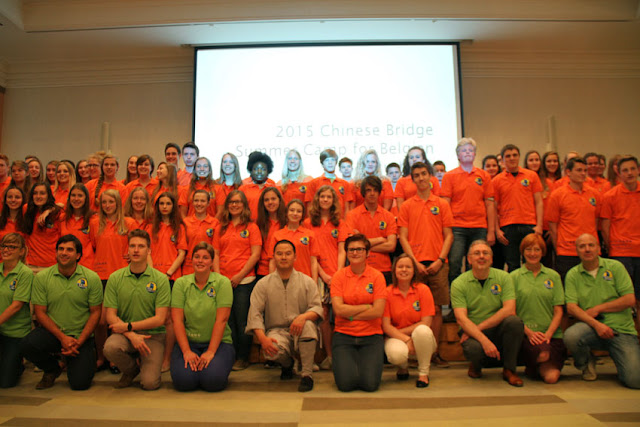 Students and teachers who will attend the 'Chinese Bridge' summer camp take a photo on June 27, 2015, in Brussels, Belgium. [Photo: CRI Online]

Ahead of this year's China-EU Leaders' Meeting in Brussels, a group of Belgian middle-school students are preparing for a trip this coming month to China to learn more about the country.

Around 100 young students from Belgium are preparing to head to China as part of a summer camp program.

Half of them will head to Chongqing, while the other half will spend their time in the province of Shandong.

Eline Alifiens is one of the students preparing to make her way to China.

She says she's been studying Mandarin for the last 3-years.

"I started to get interested in Chinese because of the economy and also I found the Chinese language very interesting and it sounds very fine to speak Chinese. I think its a good opportunity to go with this summer camp. So we could know more about the culture and language and other people there."

The tour is part of the "Chinese Bridge Project" organized by the Confucius Institute.

The program is meant to try to give overseas students a better understanding of both the Chinese language and culture.

Claeys Lieselot, who is an English teacher in Belgium, took part in the program in 2013.

She says her time in Sichuan's capital, Chengdu, opened her eyes to what China has to offer.

"In the province of Sichuan, and there we see some school where we have some of the language lessons in Chinese but also some cultural lessons, paper cutting for instance and tea ceremony. We did Tai Chi and a little bit of Kungfu as well. Some use traditional music that they play some other performances. So it is really really nice to do all of these things."

Tao Hongjian, in charge of the education program at the Chinese embassy in Belgium, says the program has done a lot to create a better understanding of China in Belgium.

"The 'Chinese Bridge' summer camp program has been developing well in recent years. Many young people have fallen in love with China through their short stays in China. Many of those who have gone on the trip have ended up choosing to study in Chinese universities or take part in university exchange programs. Many of them eventually end up finding a job in China or work back here in Belgium in areas connected to China-Belgium communications."

He's also due to meet with Belgian Prime Minister Charles Michel as part of his time there, with cross-cultural exchanges expected to be one of the highlights of his agenda.