American Students in China: It’s Not as Authoritarian as We Thought 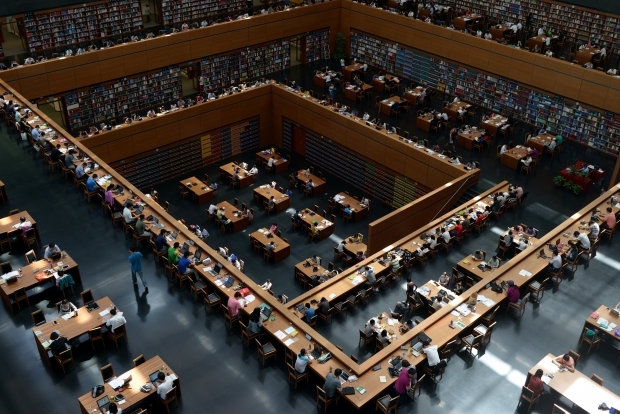 Wang Zhao—AFP/Getty Images
A general view inside a national library in Beijing on May 30, 2013.


For some American students about to embark on a study abroad trip to China, the U.S. media reports of Chinese Internet censorship, jailing of dissidents, and draconian population control laws may dominate their perception of the country. But after more than 30 years of reform and opening, the nominally communist country now combines economic liberalization, lumbering social and legal reforms, and spurts of ideological entrenchment to create a dynamic mix of restriction and freedom that’s hard to parse.

It’s little wonder first-timers don’t have it all figure out when they’re still fresh off the plane. In a recent survey, Foreign Policy asked American students and alumni who had spent time in China to share revealing anecdotes from their experiences in the country. The 385 responses often portray American students struggling to understand a country where behavior that is legal on paper is, in practice, prohibited; or conversely, where ostensibly illegal behavior or speech is often tolerated. From freedom of expression to LGBT activism to real estate deals, young Americans found that their time in the world’s largest authoritarian country helped them sketch an outline of what is—and is not—acceptable there.

“Before I went to China,” wrote Rowland Coleman, who studied at Nankai University in the northeastern city of Tianjin in 2011 while he was enrolled at American University, “I had the idea in my mind that it really was an Orwellian world where any dissent was quickly and harshly hunted down.” That’s hardly a wild supposition; Chinese authorities maintain strict controls on media, keep civil society on a tight leash, and have arrested numerous Chinese bloggers for posting sensitive content online. Currently a 2nd lieutenant in the U.S. Army Reserve, Coleman recalls one day early in his trip when he and a classmate, both with ROTC experience, were discussing army training while waiting at a bus stop. Another classmate came up to them and quietly urged, “Hey, watch what you say. Ears everywhere.” For the first few weeks, Coleman and his classmates would speak in whispers whenever discussing something that they thought might be sensitive. “If that didn’t look suspicious on its own,” Coleman wrote, “I don’t know what did.”

But over the course of his time in China, as he interacted with Chinese professors and made local friends, he discovered that not only was it not necessarily forbidden for Chinese to discuss sensitive issues and express dissenting opinions, it was fairly commonplace, though laws prohibiting critical speech were more likely to be enforced in certain circumstances. “There was a practicality to [citizen] dissent,” wrote Coleman. He noted that voiced criticisms seemed to focus on obstacles that caused difficulty in daily life and hampered economic progress, rather than large-scale political change or vague ideals. “The times that I saw people stepping out of bounds,” observed Coleman, “were when they organized, blogged about it online, or unleashed personal attacks again specific party members.”

Other survey respondents also traced out their impression of the blurry lines that divide acceptable from illicit speech in China. “I was frequently shocked to meet Chinese people who freely shared their dim views of their government,” wrote Christian Curriden, who studied in the southern city of Nanjing through a program with Brigham Young University.

“Restrictions on freedom of speech seem to depend not on what you say, but on how many people are listening.” Curriden’s observation isn’t far off the mark—authorities often don’t concern themselves with private comments by average citizens who aren’t calling for action.

And while non-governmental organizations (NGOs) and other civil society organizations—technically legal—have faced increasing pressure under Chinese President Xi Jinping, this pressure has not been applied evenly. Brandon Kemp, who studied in Beijing in 2015 with CET Academic Programs, became friends with a number of Chinese nationals who were active in the Beijing and Shanghai LGBT communities. Kemp was surprised to learn that despite the recent crackdown on NGOs, grassroots movements to support the LGBT community and make inroads into China’s often sternly traditional family values have not only escaped the axe—they have even begun to be mainstream. “As recently as 2014 China was close to banning ‘reparative therapy’ for queer and trans youth,” wrote Kemp. Shanghai Pride, the annual gay pride parade in the sprawling coastal city, “continues to go off yearly without incident,” Kemp wrote, “and groups like the Beijing LGBT Center continue to operate” though authorities have raided the offices of other NGOs such as Yirenping, a human rights center in Beijing, and detained feminist activists for planning activities of far smaller scope than a parade.

Perhaps China’s most notorious example of tolerance for illegal practices is encapsulated in the well-known Chinese maxim, “the mountains are high, and the emperor is far away”—referring to the tendency of local government officials to ignore laws that don’t suit them, knowing that they are unlikely to face repercussions from central authorities. Thorstan Fries spent a year studying Chinese at the Inter-University Program at Tsinghua University in Beijing in 2013. But in his first stint in China, before heading to the capital, he worked doing business development for a Chinese resort in the remote mountainous countryside of Guilin, while taking Chinese classes on the weekends at the Chinese Language Institute. There, he got a taste of the murky relationship between business and local officials that can characterize dealings in the swiftly developing country.

“We were in the midst of negotiating a management contract with a Western resort company,” Fries recounted, “and they asked me to send them all of our official licenses from relevant departments in China—construction licenses, hotel licenses, zoning papers.” But when Fries told his boss that they would need to send that documentation to the international firm, the man just gave him a blank look. “He then proceeded to unroll a large plan of the entire property,” wrote Fries, “showing me the various buildings we had erected in non-construction zones.”

Fries was bewildered. “The government allowed us to put up these buildings, but they didn’t provide licenses?” he asked his boss. In response, his boss put one hand over his eye and said, “They do like this,” indicating that local authorities turned a “blind eye” to the illegal buildings.

And yet, while China’s sometimes porous implementation of laws can at times allow its citizens greater freedom than they may appear to enjoy on paper, the inverse can also be true. Kyle Lawlor studied at Capital Normal University in Beijing in 2009, during the celebrations surrounding the 60th anniversary of the founding of the People’s Republic of China. He witnessed ostentatious military parades and stunning shows of state power, but one memory in particular stands out. Lawlor wrote that he observed an older woman “crying in front of Tiananmen”—the site of a bloody crackdown on student protests in 1989, now erased from official histories—who was then “swiftly carried away by some guards.” Though laws do not prohibit simple displays of emotion in public places, the Chinese friends accompanying him were “more-or-less unsympathetic, saying she was disturbing people with her emotional display,” wrote Lawlor, who now works at a tech start-up in Connecticut. He indicated that he still finds the memory “disturbing.”

Perhaps it’s the difficulty of tracing the outlines of law in China that makes some American students act as if there aren’t any. Yolanda Eng, who grew up in the United States, studied at East China Normal University in Shanghai in 2010 while a student at the University of Washington. On the night of July 4, several of her classmates purchased a large box of fireworks and shot Roman candles out of the dorm room window in celebration of the American holiday. They then went outside to an area crowded with vendors and shoppers, one of the group members donning an American flag as a cape, and lit fireworks despite the danger and confusion the explosions created for the local Chinese. Feeling ashamed of the “sense of entitlement” her classmates displayed, Eng wrote, “They treated China like their playground.”

Ugly Americans aside, experiences abroad have helped some students develop a better grasp on the complexity that underlies the country’s often monolithic façade. China’s porous laws make life in the world’s most populous country both more livable and less predictable than outsiders might imagine. For a new generation of Americans, living in a world where China plays an increasingly important role, that knowledge is likely to come in handy.

1. ​"Understanding China" is An Employable Skill for American Students

2. ​Study In China - For American Students in China, Some Risks, No Regrets
Posted by PREC Edu Services at 07:58