China plans to set up a scholarship designed exclusively for students coming to study in the country from nations involved in Beijing's initiatives to build a Silk Road Economic Belt and 21st Century Maritime Silk Road.

An official from the Ministry of Education confirmed the "One Belt and One Road" scholarship plan on Tuesday.

"We are negotiating with the Ministry of Finance on establishing scholarship programs under the (One Belt and One Road) plan to provide more support to students from those countries," said Tian Lulu.

Tian, an official in the Education Ministry's Department of International Cooperation and Exchanges, was speaking at an international forum on studying in China, held in Beijing.

The forum, which was organized by the China Education Association for International Exchanges, discussed issues such as policies, problems and solutions in recruiting and managing international students.

Tian said they are working on the design of the scholarship programs, but she declined to provide more details. She said the ministry had noticed that the major sources of international students in China are changing, and it will draw up new policies as a result.

"The number of students from some countries, such as South Korea, Japan and the United States, remains stable or has started to drop. But some neighboring countries, including India and Pakistan, are becoming emerging sources for international students in China," Tian said.

According to the Education Ministry, Pakistan, with 13,360 students coming to study last year, was the eighth-largest source of international students in China, compared with the 10th largest in 2013, when President Xi Jinping announced the "One Belt and One Road" plan.

The number of students coming to study in China from India rose from 11,781 in 2013 to 13,578 last year, making India the seventh-largest source of China's international students. 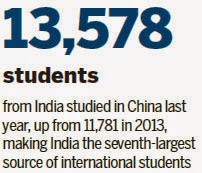 Tian said, "Against such a backdrop, we are considering providing more preferential policies to some border provinces and regions to help schools and other educational institutions recruit and accept more students from neighboring countries."

"With the implementation of the One Belt and One Road plan, a further increase in the number of students from countries involved in the plan can be expected."

Quick Link - All You Need to Know About Further Education In China
Posted by PREC Edu Services at 14:53